“The word listen contains the same letters as the word silent.” Alfred Brendel

I’m pretty sure I drive people crazy.  My husband, friends, and even my children.  I talk…a lot.  Too much maybe.  I try.  I really do.  I try to let other people talk. I ask questions and wait for an answer but then get so excited about sharing heart-to-heart that I usually jump ahead again with another thought, encouraging word, or heartfelt statement.  I wander from topic to topic, knowing in my head they all fit together but leaving the other person wondering where this adventure is going because it’s certainly not clearcut.  When I’m done, sometimes my poor husband looks like he’s been a casualty of war instead of conversing with his wife.

I realized my conversation style with people was a lot like my devotions with my Heavenly Father.  I would read a passage in the Bible, then a chapter in a study book (usually on a different topic), spend some time writing down my blessings in my journal, and then begin my prayer time.  That’s when my mind would begin to wander and I would go off on tangents, each thought reminding me of something else important I wanted to share with God until even I was lost sometimes.  I wondered how when I began praying for peace and wisdom, interrupting myself to ask God to remind me to write down potatoes on my grocery list, I ended up talking about Aunt Bertha’s boil.

Last summer my attitude regarding my prayer time began to shift during a life group in which I participated.  Our pastor began challenging us to ask God questions and then wait for the answer.  That was a difficult assignment for someone whose daily job usually requires keeping a part time job, answering the phone, making lunch for the preschooler, while doing laundry and getting dinner ready as I drink a pot of coffee and sneak in a game of Zuma (or two or three…).

However, it was important to me, so I decided to try it.  I started out asking God a small question.  Something that if He chose not to answer me, my feelings wouldn’t be hurt because the answer wasn’t life altering.  To my amazement, (Why am I amazed when God chooses to love on me just because He loves me?) He did answer me.  Or at least I thought so.  I realized the next day when He confirmed the answer through another source that yes, indeed He had. 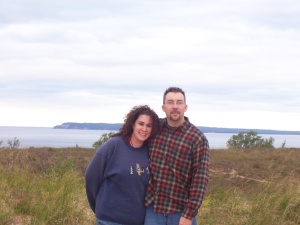 After that success, I started to build up my questions…slowly at first, still testing the waters, but gradually getting bolder as my confidence grew.  One particularly bad night, I was feeling like a failure, all alone.  And I really didn’t know what to pray but I wanted to feel close to God. So, as I was drifting off to sleep, I asked God the question, “Are you mad at me?  If you are, let me know why, and if not, please show me You’re close to me.” And then I waited…and waited…and fell asleep.

The next morning I woke up with the unanswered conversation between God and me. But, I wasn’t worried.  I had sat in silence with God enough times to realize He would answer in His time.  I went about my day, first having my devotions and then getting everyone off to work and school.  As I sat down at the computer to begin working, I read through some emails and spotted a devotion titled, Jesus Will Never Forsake You.  Reading the words on the page, it was as though God was speaking directly to me. “God’s track record is perfect. He has never failed anyone.  And He will never fail you.” If I hadn’t learned how to be silent before God to give Him a chance to speak to me, I might never had received the message of love He spoke directly to me.

For someone who never shuts up, silence can be intimidating at first, but I’ve learned to love the silence when it comes to my Heavenly Father. And, the benefits of silence have begun to stretch to my family as well.  I live in a household that consists of a blend of introverts, extroverts, and many variations in between.  Instead of overpowering my husband and children with every random thought that enters my mind, I find I gain more by sitting quietly and waiting for them to express their thoughts to me.

What about you?  Are you comfortable in silence?  Have you mastered the art of listening?  I haven’t mastered it yet, but I’m much further along now than I was last year.  I have to thank my pastor for introducing me to gift of listening.  (I think my husband probably thanks him more.)

2 thoughts on “The Language of Listening”