“Redemption: the act of saving people from sin and evil” (Merriam-Webster online Dictionary)

This past spring, our senior pastor, Pastor James, has been preaching a series titled, The Promise.The entire series has been wonderful but the third and fourth weeks were especially powerful – explaining truths in a different way from how I learned them…making them more real. The sermon was explaining the Jewish custom of passover and the significance of the four cups that are represented during the Passover celebration.The first two cups are of sanctification and blessings/freedom (or curses as the Jews refer to it as).

The way our pastor explained the third cup, the cup of Redemption, touched me deeply.To redeem something means to pay in full.He explained that in order to understand the full impact of what it means to have the privilege of living in Heaven for eternity, we had to grasp the reality of what hell will be like.The best explanation that was given in the Bible was from Revelation 14:10-11: “they, too, will drink the wine of God’s fury, which has been poured full strength into the cup of his wrath. They will be tormented with burning sulfur in the presence of the holy angels and of the Lamb.And the smoke of their torment will rise for ever and ever. There will be no rest day or night for those who worship the beast and its image, or for anyone who receives the mark of its name.”(NIV)When I fully read those verses, I don’t want anyone to have to suffer that kind of torment for one hour, let alone for eternity, a difficult concept to grasp. 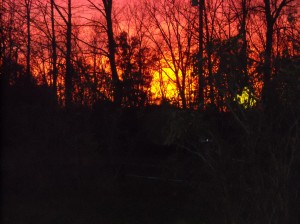 The truth is that there are two options in the world:Choosing the gift of salvation and spending eternity in Heaven with our Heavenly Father and others who have made that choice or spending eternity in hell…a very real place.I lived under the false assumption most of my life that God was a harsh Judge waiting to punish me whenever I did something wrong.Even though I knew I was saved, I still lived in fear, not that I would lose my salvation but that I would be tortured here on Earth when I made Him angry.My beliefs couldn’t have been further from the truth.

The truth is that we all deserve hell.That is the default destination.Because we sin (and everyone does), and sin separates us from God, sin cannot live in Heaven.It’s because God loved us so much that He decided He would offer us a gift of redemption in the form of His very own Son, Jesus Christ.He chose Jesus to die the horrible death we deserved in our place.And when we freely choose that gift, and the responsibility (not works) that comes with the gift, we are taken out of the default setting and given instead the new destination of Heaven.

Pastor James further explained it this way which made the conversation of heaven versus hell complete.Suppose you are walking down the street and see a house on fire. A firefighter is working feverishly to get all the people out of the building before it collapses.However, there are some people in the building who refuse to come out with the firefighter.He does what he can to offer his help, trying desperately to reach them, but they flat out refuse.When the building collapses and the people die, no one blames the firefighter for not rescuing people who refused to be rescued.He did his part but they made their choice…to refuse his help.

Next time we will talk more about this topic and how his sermon and a movie cemented this truth for me personally.