“…The Jews received Paul’s message with enthusiasm and met with him daily, examining the Scriptures to see if they supported what he said….”

Last time we were together we spoke about how to hear God’s voice and if what we’re hearing is really Him or just our thoughts. Today I would like to share with you a personal experience of how God was speaking to me yesterday before and after the sermon teaching me how to hear His voice.

This particular experience began back in May.  I was attending a women’s conference and while there, we were invited to join in an exercise to tune into God’s voice.  We were to ask Him a question and wait to see what He said.  I can’t remember the exact question but it was similar to this: “Is there something you are asking of me? Is there something you want me to do?” At first I didn’t think I heard anything, but then I got a whisper, “Singing.”  I hate to admit it, but I dismissed that “voice” as nothing more than my own thoughts wandering.

I used to sing in church regularly.  I’d joined our church choir in high school, moved several times, and missed singing so joined a new church choir and eventually was asked to participate on a worship team while in my 20s.  Then I got married, started having children, and felt I was too busy to sing except for in the car or along with the radio while making dinner.  Not to mention, I didn’t feel as if my voice was as good as it had been before.

God spoke in other areas of my life during that conference and so I thought nothing more of that whisper and shared it with no one.  One month later, my husband and I were talking with someone we had just met.  Twice during the conversation, he alluded to the fact that God loves when I sing and dance.

I went home and had a conversation with God.  I told Him that auditions for our church had just happened and I didn’t think they would occur again in the near future.  However, if He truly wanted me to sing, I would obey when offered again.

Fast forward to the morning of Pastor Sunnock’s sermon.  We walked into church and were handed an announcements sheet, one of which was worship team auditions.   I walked into the sanctuary afraid.  Nervous about what God was asking of me, whether I would have the time, whether I was good enough, etc.  Then I told myself, “This is silly.  God doesn’t want me afraid to obey Him.”  So I prayed, telling God I would step out in obedience and whatever happened, it was His will.  My fear went away and I settled in to enjoy the service. 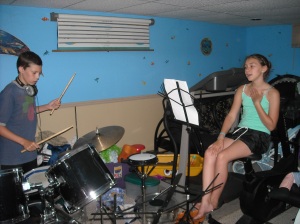 During the sermon, our pastor made one more final point after the ones we talked about last time.  He said that God tells us repeatedly in the Bible not to be afraid.  He referenced the Matthew 6:25-34 verses which talk about how much God loves the birds of the airs and if He’s willing to take care of them, He will surely take care of us.  He said we don’t have to worry about hearing God’s voice…just grow our relationship with God and make the environment one that is easier to hear when God speaks.

While listening to the announcements at the end of the service, I found out the worship team auditions needed a tape, they weren’t in person. That was good and bad.  Good because it was less intimidating, but bad because I had no idea how to make an audition tape.  I am old school. I hadn’t sang for church since 1998.  A lot has changed.  However, I decided again that I wasn’t going to worry about the details and prayed once more that God would show me what He wanted, but I was obedient.

It wasn’t until that evening while on a date with my husband and littlest (waiting for our older two to finish youth group) when God whispered the name of a friend who knows all things music.  I mentioned it to my husband and said, “What do you think?  Should I ask her to help me?”  He gave me the green light and so I sent her a message via Facebook early Monday morning asking for a huge favor.  I hit send and said, “Okay, God, it’s in Your hands now.” She responded in less than two hours stating, “NO PROBLEM,” and told me exactly what we could do and how she could help me which was way more than I imagined.

That is where I stand at this time of this writing.  God has handled the details so far, as He always does.  I have someone willing to help me make the audition tape.  I believe God will supply the right song.  Now, I’m trusting if God wants me to start singing and dancing for Him again, He will take care of my schedule and continue to work out all the details.

How do I know this?  From practice.  In January God whispered a different message on my heart.  I fasted for one month making sure it was His voice before moving forward.  Even though there have been some bumps along the road, I can walk around the bumps in peace because I know that I know that I know God spoke.  I don’t know exactly why, but I do know He did.  And, that’s all I need to know.

Will God bless me for my obedience?  I believe He will.  In fact, I believe He already has.  The first way is through the peace I feel despite the crazy schedule, lack of sleep, and interrupted family time.  The second could be in ways I’ve never even thought of.  Maybe a new career path, maybe opening doors for the path He is already leading me down…maybe something completely different.  That part doesn’t matter as much to me.  Since I’ve heard God speak in the past, I know that when I obey, He continues to talk.  And, hearing my Father’s voice on a regular basis is the best blessing of all.