“Then Jesus went to work on his disciples. “Anyone who intends to come with me has to let me lead. You’re not in the driver’s seat; I am. Don’t run from suffering; embrace it. Follow me and I’ll show you how.” Matthew 16:25 (The Message)

Anyone who knows our family knows how much our youngest loves animals, especially insects, arachnids, reptiles.  He spends hours investigating, catching and studying all things “critters.”  For his birthday, one of his friends gave him a peanut butter jar with two or three leeches in it and he was over the top excited.  For a whole week he caught bugs and fed them, watched them, and showed them to everyone who was interested as well as even a few people who might not have been. 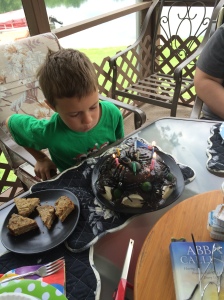 To top off his adventure, we went to my parents’ lake yesterday to fish and celebrate a belated birthday with them because they were out of town on his actual day.  He chose instead of fishing to wade in the lake with a bucket and see what he critters he could catch.  Well, in addition to water spiders and unidentified animals that live in shells, he ended up with a leech sticking to his foot.  Since mom has longer fingernails, I was designated the “leech detacher.”

I have to admit – I have grown fond of the intricacies of leeches.  They are very interesting and detailed creatures.  They can be as long as a pencil and yet as small as the eraser on the end.  They transform their shape depending upon their environment and that is also the way they move.

After returning home last night, our son decided that he was being unfair to his leeches and wanted to walk down to the creek on our road and let them go.  He had been their protector for a week now but it was time to let them live free again.  So his dad and I walked with him for the final release. 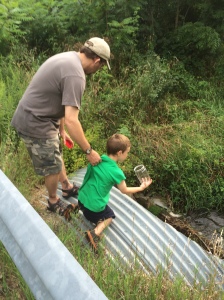 Upon arriving, he and his dad climbed over the protective barrier, opened the lid and dumped the water into the creek.  However, we soon discovered that the sticky parts that keep leeches attached to humans and other living creatures, also kept the leeches conveniently clinging to the side of the jar.  No amount of thumping, thudding or banging would loosen their hold and thus grant them their freedom.  After an exhaustive amount of time, our youngest finally gave up and declared, “Circle of life” which is his way of dealing with the untimely death of the animals he loves.

Walking back home, I started to think how many times I’ve been like leeches with my spiritual life.  How many times has God had freedom waiting for me if I would just trust Him and ride the water journey into the bigger creek?  Instead, though, like the leeches, I have clung to the side of the jar, thinking I’m saving my life when in actuality I’m losing it.  During our walk, my husband made the observation that maybe if we had just shaken the jar with the water in it and loosened the leeches hold on the sides, they would have stayed in the water and been released from captivity easier.  That made me think:  How many times has God allowed my circumstances to shake me up so that I’m clinging tighter to Him and more loosely to worldly views or ideas?

Through the story of the leeches above, I’m learning that true freedom comes from letting go of my ideas and trusting God that His plan is better, all the time.  I would rather be swimming free in the creek than have to have my son declare “circle of life” while I cling to the side of a now empty peanut butter jar.