“So he asked Jesse, “Are these all the sons you have?” “There is still the youngest,” Jesse answered. “He is tending the sheep.”

There is one more aspect to this analogy that God didn’t show me right away.  It wasn’t until about two weeks later, as I was getting ready for bed, that I realized probably the most important truth and it filled me with peace. 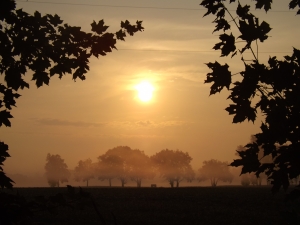 I was thinking again about David, and God reminded me of the bigger picture of his story.  David didn’t wake up one day and say, “I think I’ll work my hardest at tending sheep so that I can be king one day.”  Maybe he did, but nowhere in the Bible do I remember reading that.  God describes David as bold, a risk taker, someone who wasn’t afraid because He knew that whatever God brought him to, God would get him through.

I realized that while I see the whole story laid out in front of me, David didn’t.  He faithfully day in and day out tended sheep for years, all while God was using that training field to help David learn how to lead His people.  Here’s what God reminded me of last night…

God brings us to our destiny, our purpose through many different paths, but there is always a similar theme:  There is always a testing period to help us get ready to step into the role God has for us.  During that testing, God requires us to walk in faith, putting our feet in the river and trusting that He will show up after that first step.  There are also times that God remains silent and asks that we continue walking, holding onto the past promises and continuing to put our trust in Him.

But the most important truth God reminded me of is this.  God didn’t stir up in David’s heart the passion to campaign to be King Saul’s successor.  No, God sent a prophet to Jesse’s house (David’s father) and only when the prophet was persistent and asked Jesse if he had any other sons did they even remember David and called him out of the field to talk with the prophet.  God brought the opportunity to David, after a series of tests and time of maturity.  And, even after the promise was given, David experienced even more preparation before fulfilling the role God chose for him.

As I drifted off to sleep last night, not only was I thankful for the sheep God has me tending, but I slept peacefully knowing that when I truly let God lead, I have faith that He will orchestrate it in the best way. He won’t let me miss my visit with the prophet (whatever form that is to take).  He will bring the prophet to me or me to the prophet, His choice, when the timing is right.  In the meantime, my role is to keep fulfilling the role of sheep tender to the best of my ability.