“Consider it a sheer gift, friends, when tests and challenges come at you from all sides. You know that under pressure, your faith-life is forced into the open and shows its true colors. So don’t try to get out of anything prematurely. Let it do its work so you become mature and well-developed, not deficient in any way.” James 1:2-4 (The Message)

One particular Thursday in September started out quite ordinary. Get up, get dressed, fix lunches and send my husband and kids off to his job and school with a kiss and “see you tonight.”  I heard the car start and wondered why Bill wasn’t backing out of the driveway. Soon he came back in the house and said while the car started just fine, when he went to put it into gear, the gearshift was completely loose and it wouldn’t lock in place anywhere.

So we came up with Plan B.  He take the other car, I call his parents who live next door to see if I can borrow their van to take our third to school and we figure out how to get the car fixed, since towing wasn’t an option with it refusing to go into neutral.  Minutes later, I was calling Bill back, explaining I couldn’t reach his parents because they weren’t answering their phone. I admit – my first thoughts weren’t full of faith but instead fear. However, it only took me a few minutes to decide to give this challenge over to God and see how He took care of it, because I certainly had no ideas that didn’t add up to hundreds of dollars.

I went outside and walked around the car while praying, asking God to not only take care of fixing our car for minimal cost, but to make sure Bill’s parents were okay too.  Then I came back in the house with peace.  He brought the name of a friend of a friend who works on cars to mind so I quickly texted my friend and asked if she could just have him call me.  I thought maybe he could steer us in the right direction if he couldn’t physically come and fix it himself. In the meantime, my knight-and-shining-armor pulled back into the driveway, deciding to take the day off work so he could help me deal with this issue and we could use our other car to take our youngest to school. While I could have managed fielding calls, trying to figure out what was wrong, it was so nice to have my husband home and we could deal with this as a team.

We decided to Google the issue and through the information we gathered on the internet, Bill came across a YouTube video that showed how to fix the problem using parts from the hardware store. We took our youngest to school and had a small impromptu date for breakfast (BOGO free coupons are awesome!), and then Bill worked on the car while I worked at my jobs, five feet away from him.  He asked me early afternoon if I wanted to take a break and go with him to get the parts he needed and so we ended up having another impromptu date, laughing, joking, and just enjoying the beautiful weather and each other. I remember looking at the total when we were paying at the store and thinking to myself, “$3.92? That’s all it costs?” 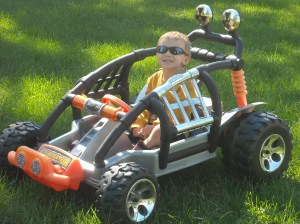 The best part? The fear that had initially tried to grab hold of me had been replaced right away with faith that God had the solution all worked out and we could trust Him.  There were so many reassurances given throughout the day.  We stopped at an auto store to see if we could buy the whole part instead of making a new one and the employee suggested the same thing YouTube did, “Your best bet would be to go to the hardware store.” The friend of the friend? He called later in the afternoon and upon hearing the symptoms I described, stated exactly what Google had told us at 8 AM that morning. By the end of the day, Bill had made a new part, installed it, and just had a few tweaks left which he would complete the following day.

All in all, God allowed our car to break on a random Thursday morning in September. Because of that “inconvenience,” my trust muscle was strengthened even more and God showed me once again He has our finances. If He can fix our car for $3.92, what else is He willing to do?

Another bonus that came from our adventure? I excitedly shared the blessing God gave us that day with others, giving Him all the glory.  The following week I received a phone call from one whom I had shared with. “Guess what? You remember your $3.92 car repair blessing?”

“Well, your blessing gave me the perfect example I needed when sharing about how God wants to be involved in every area of our lives. Thank you for sharing with me so I could share with someone else who keeps asking me questions about this God I love so much.”

I had to thank God again…not just because He cares so much about our family to save us over $500 on a random Thursday, but to remind me that everything He does for every one of us is part of the big picture…showing His love to those who are curious and might want a relationship with Him themselves.