“After Paul and Silas came out of the prison, they went to Lydia’s house, where they met with the brothers and sisters and encouraged them. Then they left.” Acts 16:40 (NIV)

I spoke last time how God had changed my feelings of hopelessness to hopefulness again just by praising and worshipping Him during the prison.  However, He also taught me one other very important lesson.

As I mentioned in the previous post, God had invited me to pray and fast for my family during this period.  I’d started to feel hopeless for many reasons, but one such reason was that I wasn’t hearing anything specific from God while I was pressing in during this time of fasting.  That was even more discouraging because I felt even more hopeless that God didn’t want to talk to me.

However, as I repented to God about choosing not to praise and worship Him and began obeying, that very act of praising and worshipping God despite my circumstances opened up the line of communication between Him and I and He began speaking to me.  Whenever God speaks to me, even if it’s to gently correct me and bring me back into obedience with His Word, it fills me with hope. 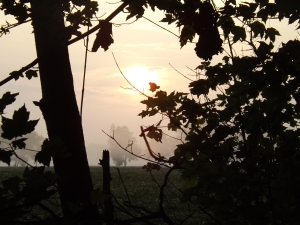 The things that God spoke to me about weren’t promises that He was going to speak and all our problems would be over.  No, but He did speak words that filled me with hope for the steps that our family needs to take in the next few months, years, etc.  He also didn’t reveal everything to me, just enough to give me hope to keep going.  He showed me ways that He is already working in our lives and helping me reach freedom and ways that we can continue to walk in freedom that might take a little longer.

The point isn’t necessarily what God spoke to me even though it was timely and personal for where I am in life.  But the point is this:  Praising and worshipping God while in the prison I was facing, instead of waiting until I was released from that prison is what released the plug that was keeping our communication from flowing freely.

While praising and worshipping God might be the last thing we want to do when facing a seemingly hopeless situation, it is the best thing to do.  It brings the focus back to where it needs to be: on God, our Father who truly does want to provide, protect, guide, comfort, heal and free us from whatever trials we will face in life.

God didn’t promise us a life without difficulty, but He did promise us hope during the heartache, peace during the pain and joy during the journey.  Hope, peace and joy come much faster and are deeper when we choose to praise and worship God despite our circumstances.